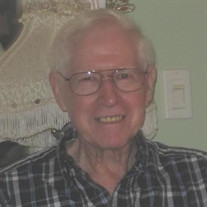 Mr. Willard Melvin Farrington, age 85, formerly of Hernando, FL, died Sunday, June 25, 2017 in Pinellas Park, FL. He was born July 27, 1931 in New London, CT, son of the late Willard and Nellie (Banta) Farrington. He was an Air Force veteran serving during the Korean War. Mr. Farrington worked for 25 years as a Lieutenant for the Fire Department for the City of St. Petersburg. While living in Citrus County, he enjoyed painting with watercolors, but oil painting was his favorite past time. He participated in numerous painting classes. His family knew him as “Gramps” and loved spending time with him. He will always be remembered for having a sweet tooth and loving desserts . He was preceded in death by his parents. Survivors include wife, Joan Farrington of Saint Petersburg, FL, daughter, Sandra Farrington of St. Petersburg, FL, son, Michael Farrington and his wife, Lori-Anne of Inverness, FL, 4 loving grandchildren, Justin Farrington, Casey Farrington, Cody Farrington, Alyssa Farrington, as well as 9 great grandchildren. Friends who wish may send memorial donations to the Hospice of Citrus County. Online condolences may be sent to the family at www.HooperFuneralHome.com. Arrangements by the Inverness Chapel of Hooper Funeral Homes & Crematory.

The family of Mr. Willard Farrington created this Life Tributes page to make it easy to share your memories.

Send flowers to the Farrington family.